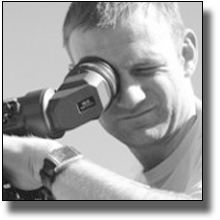 With a BA in Film and an award-winning background in broadcast television, Travis has accomplished an impressive track record as a director and producer with more than 11 years of professional experience producing international documentaries, national children’s television, travel programming, reality TV and corporate imaging.

Early in his career he earned his stripes operating camera and editing and producing DVDs for hundreds of national companies and live televised events. Throughout his career he has continued to achieve, winning many awards for directing, editing, and camera including the 2000 and 2001 National Videographer’s Award “Best of Show”, 2003 Aurora Award, Utah Best of State Award 2006 for his roll as the Producer of the hit PBS kids TV series Signing Time!–which was also nominated for a 2008 Daytime Emmy Award. In addition, he has won Telly Awards in 2003, 2004, 2005, 2006 and eight awards in 2007. Even more noteworthy was the 2007 CINE Golden Eagle award for his role as director of Acts of God, a four-part, half-hour documentary series on humanitarian aid. In 2007 he was honored to be selected as a regional judge for the television Emmy awards and was selected this year to join the Telly Awards Silver Council judging panel.

Most recently Travis has been working on several episodes of the hit series Modern Marvels on the History Channel, produced dramatic team segments for the Fox Sports presentation of the 2009 Sugar Bowl and worked on the Sundance Channel’s 2009 Sundance Film Festival coverage.